The Kelly bag is undoubtedly one of the most legendary Hermès bags. It is the fruit of the imagination of a saddler and the grace of a Princess, this timeless classic bag has been an iconic fashion statement bag for decades, the object of desire for many women.

The founder of the luxury brand, Thierry Hermès, created in 1892 the firstborn bag called “Haut à Courroies”.
Originally intended for horseriders, this large leather bag designed was used to protect and transport saddles and riding boots. This ingenious and practical bag made life easier for the riders and offered them an early expression of elegance. Its’ rigid flap folded flat against the rear of the bag creating a wide opening. The two saddle flaps were thus held in place by the straps, as if absorbed by the bag, like a sleight of hand.

From rider to traveler bag – diverted from its equestrian use by the arrival of the automobile, the ‘Haut à courroies’ bag became the ideal travel bag for adventurers.

In 1935 Robert Dumas-Hermès, redesigned the bag and reduced the size and cut to make it more feminine. The success was immediate.

It was then called a “dispatch bag” and it was only in 1958 that he really took off when Princess Grace Kelly got off her plane and tried to hide her pregnancy with her Hermès bag.

The photo cliche made worldwide headlines and the impact on the brand was phenomenal. The Dumas-Hermès brothers then decided to change the name of the bag and named it ‘Kelly’

Buying a Kelly Bag – What You Should Know

It is very valuable bag, whether you buy a vintage one or a new one from any of the Hermès store. It is one of the most demanded bags from the brand despite its’ high price. In order to meet the strong global demand handbags Hermès has had to open new workshops all over France. Every Kelly bag is made in France and each employee working in the workshops are trained locally in training schools. The Kelly bag is available in many colours, using around twenty of the most luxurious leathers including lambskin, crocodile, ostrich, calf grained, Clémence bull calf… and benefiting from a unique know-how craftsmanship. Each bag is made with great care by one single craftsman and it requires about 20 hours of manual work and all seams are in linen thread. Each piece is marked with a hallmark which identifies the year of manufacture as well as the workshop and the craftsman who made it. This bag has a characteristic closure with two leather straps, gold-tone clasp closure or palladium with a small padlock and signed two keys. The base is protected from wear by four strong studs. There are eight sizes, which vary from 15 to 50 cm in width. From the 1960s a removable strap was added to the handle.

Kelly bags are sold retail for thousands of pounds, with the record for the most expensive Kelly bag held by the Hermès 32 cm Matte Geranium Porosus Crocodile and Black Togo Leather Sellier Kelly Bag with Feet, which sold at auction for $125,000.

Check out our Kelly vintage bags – all of our bags are preowned and in excellent condition. Buying an Hermès Kelly or Birkin new or second-hand it’s an excellent investment, should you choose to resell it. 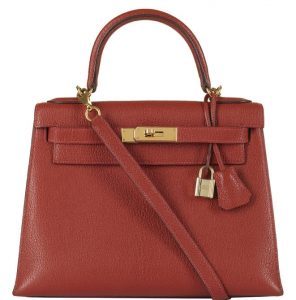 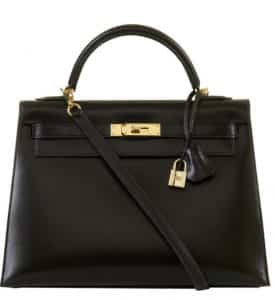 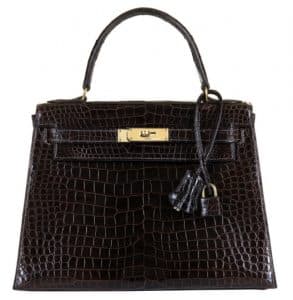 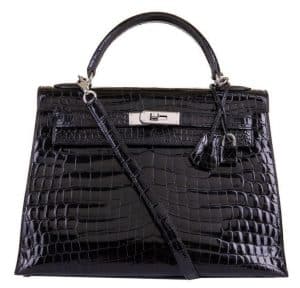 Hermes have produced astonishing variations of the Kelly to promote this legendary bag, for example a Kelly bag in chocolate, in plexiglass, embroidered by Maison Lesage Paris (Haute Couture) or in very large size: 4 m high by 1 m wide. In 2004 and again in 2006, Jean-Paul Gaultier, then Director Artistic of Hermès, designed the new Kelly line, the pouches, the Mini Kelly Pochette and the Kelly Long. Subsequently, Afterwards, Hermès set out to develop its classic line with the appearance of the Kelly wallet, the So Kelly bucket bag and the Toolbox bag. 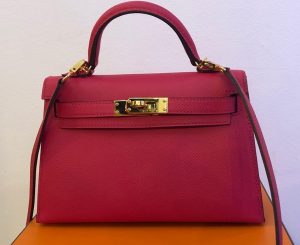 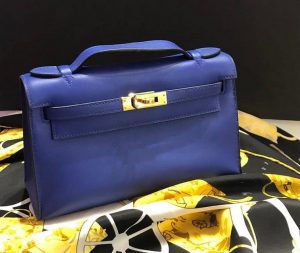