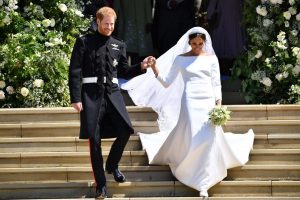 TOPSHOT – Britain’s Prince Harry, Duke of Sussex and his wife Meghan, Duchess of Sussex emerge from the West Door of St George’s Chapel, Windsor Castle, in Windsor, on May 19, 2018 after their wedding ceremony. / AFP PHOTO / POOL AND AFP PHOTO / Ben STANSALL